April is National Poetry Month. I have neglected it sorely. Better late than never, right? If you are anywhere near Amherst, Mass in May – The Amherst Ballet has created a ballet to commemorate their famous recluse. They will cleverly use music found among the family possesions and readings of her poetry, while Emily flits here and there in her trademark white dress. I notice from the flyer they made an exact replica. I would have loved to do the costumes for this show – I had some really good ideas. Maybe they will put it on DVD so I can see it. I won’t be going to Amherst until the 24th for Mt. Holyoke’s graduation.

I hope their ballet is a huge success. How appropriate for it to be near graduation time, a time when Emily’s family hosted commencement teas and parties… It is a marriage of my favorite things … ballet and reading…

I leave you with Emily…

I cannot dance upon my Toes —

No Man instructed me —

But oftentimes, among my mind,

A Glee possesseth me,

That had I Ballet knowledge —

Would put itself abroad

In Pirouette to blanch a Troupe —

Or lay a Prima, mad,

And though I had no Gown of Gauze —

No Ringlet, to my Hair,

One Claw upon the Air,

Nor tossed my shape in Eider Balls,

Nor rolled on wheels of snow

Till I was out of sight, in sound,

The House encore me so —

Nor any know I know the Art

Nor any Placard boast me —

I Twittered for five days. I hated it. It reminded me of junior high and trying to be in the popular crowd. So, I deleted my account. I am not going to say anymore about it except, it is just tooooo much.

I know I ramble on quite a bit about the Brontes, Jane Austen and I even have an Emily Dickinson page. But, I also adore Wilkie Collins. The Woman in White is a favorite, favorite book.

Consequently, whenever I see the words “like Wilkie Collins” in book review, I rush out and use my gift certificate. I discovered The Meaning of Night in this manner. Today, I read Michael Cox has died. I hate it when a great story telling voice is silenced. 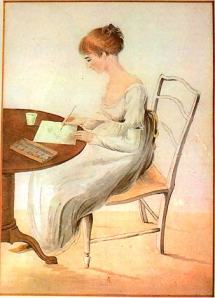 About three or four years ago I read The Shadow of the Wind by Carlos Ruiz Zafon. The book had a very inviting cover and I remember the sensation of losing myself in Barcelona while  sitting on my front porch in early summer.  I read it for three days practically non-stop. It had all the qualities of a great story: mystery, old secrets, lost love. I sighed heavily as I closed the book and was filled with regret I had read it so voraciously. On the other hand, it was unavoidable. Since finishing the book all those summers ago, I have been religiously checking Amazon to see if Mr. Zafon (who has the BEST name) has written another book.

Today, I was taking a brief break from whatever I was doing and I aimlessly brought up Amazon and typed Mr. Zafon’s name in the search box and wonder of wonders – he has written another book! I can hardly wait for June to get here, because that is when the book will be released.

Later, I found Mr. Zafon’s website and clicked around until I found the page where he lists his favorite things. I loved this list in particular:

TO KILL A MOCKINGBIRD by Harper Lee

THE FALLS by Joyce Carol Oates

THE HAUNTING OF HILL HOUSE by Shirley Jackson

THE WOMAN IN BLACK by Susan Hill

I have read every book on this list except The Falls – I will probably rush out with my very special, humungous Christmas Barnes and Noble gift certificate and purchase The Falls this weekend…

The Shadow of the Wind does have a very Bronte feel to it. All Bronte lovers should read it.

Be sure to watch his atmospheric video about his new book The Angels Game. OH! I love waiting on pins and needles for a good book!

This video of Susan Boyle singing the song I Dreamed a Dream from Les Miserables is incredibly moving. I would embed it, but I just can’t figure out how so PLEASE CLICK THIS LINK.  What a perfect song to choose if you want to make the point Ms. Boyle made. She is my new hero.

Yet, it is also profoundly troubling as well in an achey breaky heart kind of way. Somehow, it was assumed by the three judges and the ENTIRE audience Ms. Boyle was some sort of a joke.The implication was complete disdain. The cameras panned the audience and the facial expressions of those present can only be summed up as cruel. If indeed she had turned out to be awful, what could possibly justify subjecting her to a public humiliation of such magnitude? I know, I know, American Idol routinely spotlights the most hideous contestants imaginable. Yet, they seem to want the distinction of being the worst talent in order to make onto the initial episodes. I really hate American Idol.

But this clip is amazing. After watching it a couple of times I thought, Susan Boyle is really fetching. And, not only that, she kind of reminded me of THIS FASHION PLATE.

There’s a fashion plate inside of everyone. Especially hidden talent like Susan Boyle.

I made my traditional lamb cake today. Somehow, he turned out to look suspiciously like a bichon frise. A very funny friend of mine commented on lambie – she said “Oh, Lamb of cake take away the carbs of the world.” I answered her, “And grant us a piece.”

I love the Episcopal liturgy. I mean no disrespect. But, it really is funny.

OH! Time for a fashion plate! This lovely lady is wearing her cross and has on her Easter bonnet… with all the trim upon it… could she be getting ready for the Easter parade?

The BBC is putting together another version of Emma . It will be a four part series. I do hope they get a wonderful Miss Bates. The Miss Bates (Sophie Thompson) in the Gweneth Paltrow version was my absolute favorite!. Did you know Sophie Thompson is Emma Thompson’s sister and Mrs. Bates was played by Emma Thompson’s mother Phyllida Law? An interesting bit of trivia.  I often do a fabulous immitation of Miss Bates to entertain people at work.